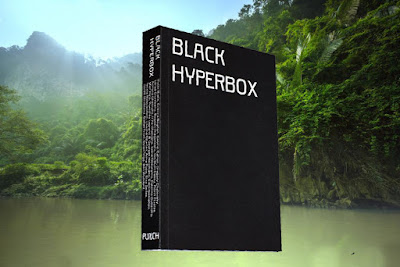 This was the text that announced Black Hyperbox, initiated by Florin Flueras and Alina Popa in 2015. Black Hyperbox started as a frame for performance and text based on the alienation between practice and conceptualization. Meanwhile, individual artworks, mostly performances, emerged from its process. They are circulating sometimes independently, sometimes together. Now Black Hyperbox is also a book, the outcome of the discursive section of the project. Its contributing authors were immersed in Black Hyperbox or gravitating around it, at least conceptually. In the book, Black Hyperbox comes forth as a place that holds incompatible conceptual zones and spatiotemporalities together: Old World and New World, theater and jungle, jaguars and AI, prehistory and futurism, the earthly home and the alien space, Mecca and the North Pole, spaceships lost in cosmos and the politics of Isis, Malevich’s black square and the moon travel, thought and hallucination.

Black Hyperbox book is edited by Alina Popa and Florin Flueras and published by PUNCH.
Artworlds 2016.