Dreaming the End of Dreaming Program

When dreaming is treated as a real praxis, and the dream as just another medium, like the actual world, then to pass from waking life to the dreamworld is to switch between equally existent worlds, to travel from one medium to another. The transversal navigation between these worlds-as-medium is made possible by the disruptive moments of waking up and falling asleep. A medium is a full behavioural space with its own affective and logical syntax. The theatre's black box, like the broader notion of black box, is a space which is not primarily architectural, but a relational mesh of percepts, gestures and acts—a net of possible behaviours. The black box of performance is a medium that resembles the oneiric space, since it is also not taken for granted as being real, or is rather thought to be cut off from the surrounding reality. It is usually said that in order to reach the real world, one has to wake up from the black box. There are many symptoms nowadays of a contemporary art that needs to wake up to reality. But what if the real itself is a black box? What if waking up from art to reality is like travelling from box to box? Black-boxing the obvious reveals a black box more Real than what we prosaically call reality.

If power today operates environmentally, it does so by treating fictions as true in a world that is like a black box. The transference of knowledge and practices between the black box and the dreamworld are relevant now, as the only way to respond to the oneiric sovereignty of capital seems to be to overdream, to accelerate the dreaming not of fictional and alternative worlds, but of reality itself. If the world is treated as the black box, what does it entail to treat the dream as real? The answer to this question is all the more interesting now when many signs indicate that we may be in a process of extinction. It is important to imaginatively and practically speculate about what happens when the worlds are ending. A starting point for this could be the special dream in which you constantly wake up only to realize that you are actually in another dream. You are just falling from a dream into another dream, from one box into another (black) box, dreaming the end of dreaming.

With the event Dreaming the End of Dreaming, the two Romanian artists and fellows in the program art, science & business ALINA POPA and FLORIN FLUERAS take up the notion of the dream as a real praxis, presenting lectures by the Argentinian philosopher GABRIEL CATREN, the Brazilian literary and cultural theorist of Latin America DENEB KOZIKOSKI, and the Canadian researcher VICTOR BLAKE. The presentations will be followed by the performance Eternal Feeding by Florin Flueras and Alina Popa at 9 p.m. on the same day. From July 4 to July 7, there will be a workshop with the invited lecturers and the Romanian artists ION DUMITRESCU, BOGDAN DRAGANESCU and ADRIANA GHEORGHE.


16h45
Calling Sister Midnight: The End of the Seizure of Dreaming for Political Ends
Deneb Kozikoski

Socio-political dreaming is a historically salient mode of expression in the 20th and the 21st centuries, and is manifested in several modalities of modernism, from architecture, to cinema and textual genres such as the manifesto. Exploring the ways in which dreaming, imagination, projection, and more recently simulation, are leveraged as techniques and media for socio-political change, this presentation elaborates techniques of engagements with reality as to break the grip of political dreaming. The de-trivialization of “coming to grips with reality” is an arduous process, and demands the deflation of speculation as a philosophical meme and end unto itself. This presentation explores the basic dynamics between fiction and reality, dreaming and awakening, by drawing on texts such as Macrobius’ Commentary on Scipio’s Dream, Philip K. Dick’s “Cosmogony and Cosmology,” and selected moments in Clarice Lispector’s writings. The idea, however, is not to dwell on the literary and ideational aspects of these textual interventions but to elaborate practices other than the socio-political modernization of dreaming.

In order to focus attention on the practice of dreaming, this presentation will examine and explore the following questions: What is the relationship between dreaming and technology? Would a practice of dreaming entail specific techniques? One of the hypotheses orienting this approach is that the stance or disposition appropriate to dreaming has been harnessed––radically interrupted, suppressed, and controlled––via the hyperstitional armoury of the imperial technosciences, and that the ‘vector’ of this entrainment, so to speak, can be modeled as the diametric opposite (the reflection, or dual) of the ancient practices that aim to harness and control hyperstition (via hypostitional orientation: yogascittavrttinirodha in Patanjali). It is, hyperintelligibly (rather than ironically), through the obsolescence of hypostition (qua final causation) that the hyperstitionalization of ‘history’ proceeds to reify itself concretely as an ‘externalized’ imagination whose installation occurs simultaneously psycho-interioristically and physico-environmentally. Now that the dream is becoming hyperreal, dreaming will have to retrieve its realistic orientation, integrating hyperstition with hypostition to achieve something approximated by Castaneda’s ethno-cosmological theory-fiction: to dream the real we have to learn how to stalk the dream.

We thus find ourselves poised on a threshold: Aquarius, the water-bearer, pours out the contents of hir urn, transposing the extrinsic stabilization of unconscious habits of self-identification into the hyper-objective form of code, at once fragmenting ‘traditional’ social corporealities and privileging hyperstitional opportunisms. In a revery, this pouring-out of the contents of the Aquarian vessel could take the form of a cosmic cataract, turning inside-out and reducing to their limits––of reversibility qua ‘identity of indiscernables’––the dialectical categories which had ‘grasped’ difference, which in turn becomes ‘positive’ (pace Deleuze). Ideology as ‘overcoded structure’ (in Marxian idiom) is thereby rendered susceptible to an occultic (abductive) interpretation, whereupon Heideggerian ‘enframing’, Foucauldian ‘dispositivity’, and McLuhanian ‘formal causation’ become roughly equivalent descriptions of the (many) ways in which the imaginary prevails or supervenes upon the substratic techno-instantiations of––at once, and complementarily––our inner and outer world(s).

In this lecture we shall address the problem of sublating the Kantian interdiction regarding the possibility of extending human experience beyond the realm of constituted phenomenality. We shall argue that a full-fledged existencialization of the subject of experience entails the possibility of performing (what we could call) shamanic variations of its very transcendental structure. This speculative perturbation of the transcendental subject permits to activate transumweltic degrees of freedom and thereby gain access to a phenoumenodelic field of experience. The central notion of phenoumenon diagonalizes the Kantian dichotomy between phenomena and noumena by upholding the identity between being and appearing without succumbing either to any form of subjective idealism or to any critical limitation of (theoretical, aesthetical, affective, and/or political) experience.

Given the simulational character of consciousness we are always involved in a sort of dreaming, despite the feeling of being in direct contact with external reality. Even when we feel awake, the transparent dreaming-operations are what makes a world appear to us. But what happens if the implicit simulation is speculatively doubled with a consciously performed one? The black box seems to be a good place for pushing the generalized dreaming to extremes:

1. Nothing (underdreaming)
If the minimal model of dreaming, and of consciousness, is just a point immersed in the hallucination of an abstract, contentless space, how to consciously minimize the modes of being? How to asymptotically reach the state of being an empty point in an empty space, and navigate the room with the map of nothing?

2. Everything (overdreaming)
What happens if an excess of dreaming is applied to a reality, if we overdream the world in which we are caught? Maybe there is an optimum degree of dreaming for a reality to remain a reality, for a world to be natural. A self-referential paradox induces anomalies and shakes the entire frame, context, environment, theoretical construction, wherever it appears. Whatever the paradox of dreaming the dreaming will produce, you can stop it at anytime, and say that everything was just a performance, or wake up and say that all was just a dream.

Dreaming Praxis
The meetings will be focused on expanding the presentations from July 3 through discussions, readings, and performative practices. In a relaxed frame, we will explore possibilities of alienation from concepts through practices, and from practices through thinking.
With Alina Popa, Florin Flueras, Deneb Kozikoski, Victor Blake, Gabriel Catren, Adriana Gheorghe, Ion Dumitrescu, Bogdan Draganescu.

And a selection of #endream films in the evenings, for the open air cinema. 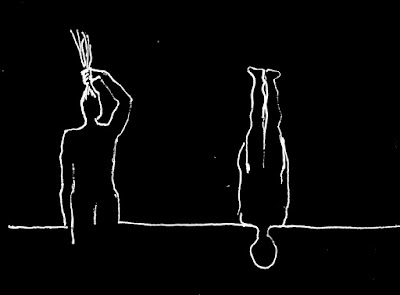